Charlie’s Kitchen located at 10 Eliot Street in Cambridge, MA has charming beer garden that should not be overlooked!  Beer gardens are the “new” coffee shops of the world.  So gather your friends and co-workers and come check out Charlie’s Kitchen’s beer garden!

In recent years, beer gardens have been returning to American cities and usually offer open spaces, table seating and bar seating, food menu and even live music.  They are a fun gathering spot for good conversation and beer!  Beer Gardens including the one at Charlie’s Kitchen can be open year round (weather permitting).   Today’s beer gardens in America are a bit fancier than the German beer gardens in the past.   You will find some with spectacular food and design innovations such as the fire lit tables at Charlie’s Kitchen.

Beer gardens in America first starting appearing in the 19th century and took after the German way of spending afternoons outside while spending time with family and friends and enjoying a brew or two!

Germany’s beer gardens started after brewing was banned during the summer months due to many brewery fires.  Breweries then started digging cellars near riverbanks to keep their beer cold until they needed it in the summer.  This also gave their lagers the perfect conditions to ferment properly.  It didn’t take long for tables and chairs to start showing up near these brewing locations along the rivers.  Thousands of people would gather together to sit outside, listen to music and enjoy the fresh brewed beer.

Tucked away in this eclectic area of Cambridge, the beer garden at Charlie’s Kitchen has something for everyone.  From 18 draught beers, a full menu and the popular fire top tables.  No need to stay away on a chilly fall evening, these fire top tables are awesome! 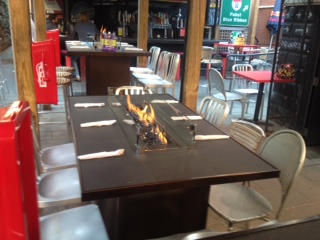 Gather your friends, family and co-workers and come see what the beer garden craze is all about. We think you’re going to really enjoy the beer garden at Charlie’s Kitchen and we look forward to serving you really soon!  Don’t forget to try one of our delicious food items off of our menu while you’re visiting!

The best time in Harvard Square