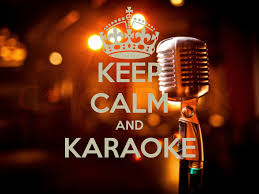 We all know how fun karaoke can be!  Singing out your favorite songs with friends while a karaoke machine displays the lyrics and the music! Pretty much everyone has tried it at least once in their lives.

Where did karaoke originate?  Here’s some history on this Japanese pastime.  Karaoke is a blending of two Japanese words “Kara” meaning empty and “Oke” meaning orchestra.  The first karaoke machine was developed in the 1970’s!  It originally was a cassette player!

Now, with technology being so advanced, karaoke can be done on phones and computers.  In Asia, karaoke boxes are still the most popular type of karaoke venue.  A karaoke box is rented by the half hour or hour providing a more personal feel with food and bar service.   In North America & Europe, there are karaoke bars, or restaurants and bars that provide karaoke equipment so that people can sing publicly.

Here are some karaoke facts for you:

Many places have weekly karaoke nights such as Charlie’s Kitchen where you can belt out your favorite songs every Tuesday night!  Come early have dinner and then get out there and have some fun singing with your friends!  Charlie’s Kitchen is the best venue in the Cambridge area to hang out  with friends and have a good time!

The best time in Harvard Square